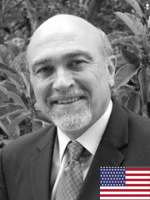 Professor (UCLA School of Dentistry), Chair of the Division of Public Health and Community Dentistry.

James J. Crall received DDS and master’s degrees and a certificate in pediatric dentistry from the University of Iowa, and is a Board Certified Pediatric Dentist. He was a Robert Wood Johnson Foundation Dental Research Scholar and obtained masters and doctoral degrees in Health Policy and Management from the Harvard School of Public Health. Jim also was the first Dental Scholar-in-Residence at the Agency for Healthcare Research & Quality, a branch of the U.S. Department of Health & Human Services.

He has authored/co-authored over 150 peer-reviewed publications, chapters, commissioned works and policy briefs, and is considered an expert in caries prevention, oral health disparities, health care delivery and financing, and quality improvement. Jim has been principal investigator for grants and contracts awarded by governmental agencies and private foundations, with total funding of over $60 million.

Jim served as AAPD’s Child Advocate (ex-officio member of AAPD Board of Trustees) from 1995-2014, and currently is a consultant for AAPD’s Council on Government Affairs and Policy & Research Center. He received AAPD’s Pediatric Dentist of the Year Award in 2005 and the AAPD Distinguished Service Award in 2008.